Tirupati is a city famous as Hindu pilgrim place in the state of Andhra Pradesh, India. The developing city witnesses millions of visitors round the year. The city is surrounded with seven hills and the greenery around it makes the city look more beautiful. The official language of the city is Telugu. The language spoken by the people of the city are Hindi, English, Tamil, Telugu and Urdu.

Hinduism is the main religion followed by the people of Tirupati. The people of the city are simple and hard working. They start their journey to earn their daily bread right from the early morning at 3:00am and work till late evening. Most of the people work and earn on daily basis. 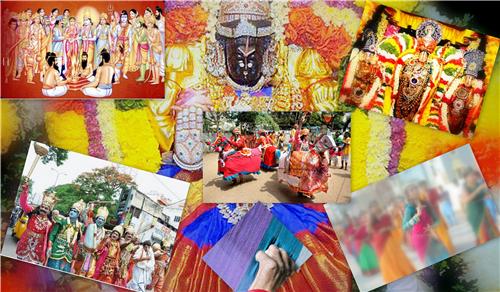 People and Religion in Tirupati

Culture of any city can be defined on the basis of the people of the city, Art, Architecture, Literature, Cuisine, Clothing, religious practice and philosophy.


Dress and Clothing of the people of Tirupati

Tholu Bommalata is a puppet show which showcases the traditional epics of Hinduism. The scenes of Ramayana are generally played in the puppet show.

The architecture of the temples and forts in the city speak about their own cultural value. The use of granite and lime stone in the ancient buildings is marvelous. Religion and philosophy contribution reflects Hindu tradition, Buddhist tradition, Islamic-Hindu fusion tradition. The different forms of dances linked with the state of Andhra Pradesh are some folk dance like Kanduka Nartana, Perani, Suddha Nartana, Rasaka, Gondali, Danda Rasaka, Carcari, Shiva Priya, Bhandika Nrityam, Prenkhana, Carana Nrityam, Chindu  and Kolatam are described.