Tirupati-Tirumala a holy land of Hindus celebrates many festivals with enthusiasm and happiness. The devotees decorate their Lord idols and temples. The most auspicious festival of Tirupati is Brahmotsavam. Utsavam means festival. The auspicious festival day is treated as very important day on which special prasadam is prepared. The devotees believe that visiting the temple on this auspicious day will help them get better future.

It is celebrated on the sixth day in the month of Aippasi as destruction of evil by supreme power. 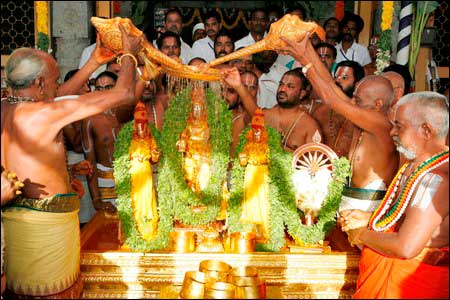 Dolotsavam is a festival celebrated by decorating Lord Venkateshwara along with his consorts the swing or boat which floats in Pushkarini (water tank).

On Shukla Dashami this five day purification festival is celebrated in the month of Shravana (June-July).

On the day when Sun starts its journey towards North so it is known as Uttaryan. It is celebrated in the mid of the month of January. The planetary position of Sun changes and it enters Makar rashi.

In the month of Pratipada (March-April) Chandramaana Yugadi is celebrated. The festival is celebrated for 40days. 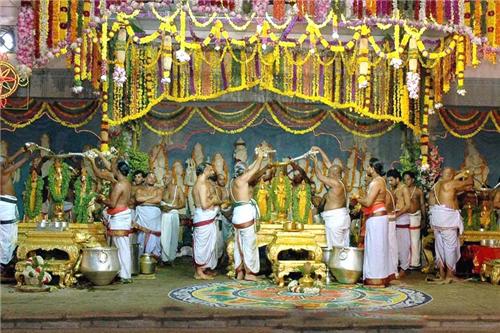 In the month of Chaitra (March) on Triyodasi, Chaturdasi and Poornima a festival is conducted at Tirumala temple. Sri Malayappa Swami and his consorts are taken out and abhishekam is done in vasantha mantapam. On third day Lord Ram, Lakshman and Goddesses Sita are also taken out on palki.
Vasanthotsavam is a festival of colors, celebrated for 3days. The color spray is played between Lord Venkateshwara and his consorts along with devotees. The cost to be paid to enjoy the color festival is Rs.3000 per 10person.

The “Holy shrine” is performed for the purification of the temple and its premises. It is performed four times in a year before Ugadi, Anivara Asthanam, Vaikuntha Ekadashi, and Annual Utsavam.

The ceremony of purification is Pavitrotsavam which is performed for three days, during Sarvanam (August) on tenth day of shuklapaksha.

On Phalgun Poornima the five day festival is celebrated in Swami Pushkarini.

Wedding of Lord Venkateshwara and Padmavathi is celebrated in the month of May. The three day lasting festival includes dancing, singing, etc.

The festival celebrated by women in Andhra Pradesh and Karnataka. It is celebrated in the month of July-August on second Friday before Poornima or full moon day to get the blessings from Goddesses Lakshmi.

The re-birth of Lord Ganesha is celebrated on this day in the month of Bhadrapada. It is celebrated for 10days the last day is Anant Chaturdashi.

Dussera or Vijyadashmi is celebrated on the last of Navratri in the month of September-October. It is a festival of victory of truth over evil.

Atla Tadde 3rd day in bright half of Aswiyuja month (falls in September/October in Gregorian calendar). It is a festival celebrated my married woman for the long, healthy and wealthy life of their husband. It falls on the third night after full moon day (Aswiyuja) according to Telgu Calendar.

It is celebrated on the day when Lord Rama along with Goddesses Sita and Lord Laxman returned to his homeland after killing Ravana and after completing his vanvas of 14 years. It is a celebration of five days where the main pooja is done on no moon day. It is also celebrated as Maha Lakshmi birthday. The lamps are lit in all houses and the houses are decorated. It is also known as festival of light.

Explore more about Culture of Tirupati