Tirupati is a city in Chitoor district in the state of Andhra Pradesh, South India. It is a well known pilgrimage place. It is the richest city of the state as the temples in the city receives billions of money as donation. It is the largest city in Rayalaseema region. It is also known to be the 4th largest growing city amongst the Indian states.

The city is surrounded with seven hills and it lies at the foothills of these Eastern ghats. It lies between two metro cities Chennai and Bangalore. 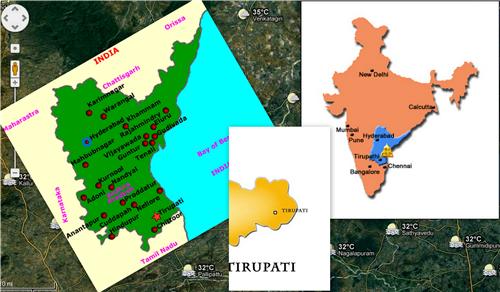 Distance Chart from nearby places

The city is well known for Venkateshwara Temple and Goddesses Padmavti Temple. The city witnesses millions of visitors round the year. It has become a major economical and educational hub.
The languages spoken in this place are Hindi, English, Tamil and Telugu.

The greenery around the city keeps the environment of the city clean and healthy.

The city remains crowded round the year with visitors from different parts of the world. The season is not a concern for devotees visiting their deity. The peace and positivity in the city will make one feel relaxed.