Most of the people visiting Andhra Pradesh, visit Tirupati - one of India's holy places. Millions of devotees visit Tirupati-Tirumala every year and travel long distances to reach this divine place just to get a glimpse of Lord Venkateshwara and Goddesses Padmavati.

One can choose the way to reach the temple that is either by walking from the foot hill to top or by a car till the top of the hill. Tirumala Tirupati Devasthanams (TTD) has made arrangements for the people who prefer walking by making arrangement for water, food, toilet, bhakti channel and devotional music facilities along the path.

TTD has also introduced ticket system to visit the temple along with the free entry. The free entry path is little longer. The paid path is little shorter and has the facility of sitting area along with live darshan telecast. The lines get merge at a point and the walk through towards the temple has staircases going up and down. After the staircase, one reaches the temple of the Lord Venkateshwara. Special entry is for people with diseases listed under handicap, aged, lactating mothers, via Maha Dwaram that is the main entrance of the temple, if needed they can be accompanied with an attendant.

The VIP darshan is also available. At the time when there is a VIP visit to the temple the darshan time of the people in line increases. It takes almost two to three hours to complete the darshan of the huge temple.

The types of Darshan are listed below-

The queue of pilgrims crosses numerous big halls to reach the main temple. The path towards the temple has halls with sitting area, toilet and canteens in between for pilgrims to stop and take rest. The complex where the queue gets merged is known as Vaikuntam queue complex. TTD has made available for free food and beverages (tea, milk and coffee) facility for the pilgrims. 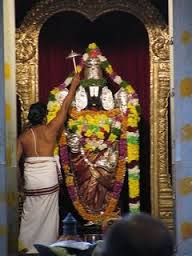 Other facilities are listed below-

Darshan for all has fixed timings day wise. The timing may vary from 18hours a day to 20hours a day depending on the occasion.

The timing of Shegrah darshan and Sarva Darshan are listed below-

As the temple witnesses millions of devotees, TTD introduced Rs.50/- token system for Darshan and named it as Sudarshanam. This helped in reducing the darshan timing of pilgrims for doing paid and free darshan.

The token can be purchased from-

The token issued is valid for a single person for single darshan. The token contains the token number and time of darshan. The pilgrim needs to enter the Vaikuntam Queue Complex at the time mentioned in the token. This has helped TTD in maintaining the record of number of people visited also has helped them manage the crowd.

On the other hand the token system helps the pilgrims reach the temple mentioned on the token without hurry. Most of the pilgrims utilizes the time in visiting the other temples like Sri Govindarajaswami Temple, Kapila Teertham (Tirupati), Sri Padmavathi Ammavari Temple (Tiruchanur) and Sri Kalyana Venkateswara Swami Temple (Srinivasa Mangapuram).


Precautions issued by TTD for Pilgrims are-